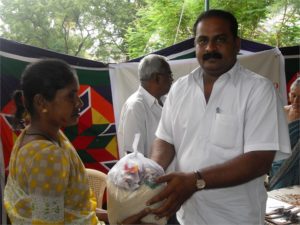 World AIDS day was conducted in ASWO premises, around 70 PLHAs participated in this programme. Mr. Jayakumar, Retd Superintendent Housing Board inaugurated the programme and spoke on ‘Healthy living and practices’. At the end of the programme games was conducted for the participants, and prizes were distributed. The PLHAs were encouraged to join the Positive network and know the benefits and schemes allotted for them. Nutrition hampers were distributed to the PLHAs who attended the programme. ASWO has appointed an advocate Mrs. Vennila to work for the benefit and welfare of the PLHAs in eradicating stigma and discrimination, also the PLHAs were encouraged to contact Advocate Vennila for further help in their respective areas. PLHAs felt very happy about their rights being advocated to them. Finally pastor Willingston prayed for the health and family of the PLHAs since they were all psychologically affected.
TANSACS also conducted World AIDS day programme on the same day in the Director’s office, Race course. On behalf of ASWO 3 school represented and participated in competition like poetry, elocution and drama.